On the Subject of The Thing’s Lack of Pants

August 20, 2015 Videogames, Writing Comments Off on On the Subject of The Thing’s Lack of Pants

Allow me, gentle reader, to revisit a topic that is near and dear to my heart. Character design. Â Most of the time, I’m working with character design for my games, either my own, or consulting on someone else’s project. Â This doesn’t mean I’m figuring out what their favorite color is, or what their favorite birthday cake is (the answer is ALWAYS chocolate). Â Most of the time I’m trying to deconstruct something more vague, something to see if a character “works” and if not, WHY doesn’t it work.

Now I know, I KNOW that getting all photoreal is the thing to do with GCI (especially in superhero movies/tv) these days. Â We’re trying to move away from the past… what, 20 years, of best-of show latex and muscle suits. Â I get that. Â But you have to remember, a lot of these superheroes were developed by traditional illustrators. Â People who were destined to be “car stuffers” or advertising illustrators before they found their way into comic-books as a trade. Â Many heroes were likely designed with a handful of constraints in mind. Â 1. You had to be able to draw them quickly and repeatedly. Â 2. You had to work with howÂ the comic book would be printed (b/w line, grey halftones, 4 color process, etc) and 3. You had to have a clearly recognizable, definable figure.

Now, it could be argued that The Thing is one of the most recognizable figures in comic books. Â Almost on a par with The Hulk, you might say.

Thing is (ha ha) that as a character design he’s very fiddly. Â That stone-pebble surfacing that helps to make him so distinctiveÂ makes it hard for us, as a viewer, to make out the lines that normally indicate muscles, foreshortening, even the details on the face get muddled and hard to discern.

This is a problem that has carried over to the most recent cinematic version of The Thing, and I would argue that his “breaking up” effect has been compounded even further by the decision to have Thing without a costume at all.

From a visual standpoint, there were some excellent decisions made here, most particularly with the variation in patterning of the stone, large pieces and small ones, to help us better discern one body part from another. Â the lack of definition to the feet also makes perfect sense, and gives him a somewhat alien look.

The very nature of the Thing’s key design element (the pebbly skin) means you need to give some thought to two key elements.

First off, his face. Â Right now, we get a wall of rock. Â Which is okay if you’re clobberin’ the bad guys, but if you are trying to develop any kind of empathy with your audience, if they want us to care about what happens to The Thing at all, we’ve got to be able to make a connection to his eyesÂ and facial expressions.

Now, I’ll point out that the recent run of comic book artists have already solved this one: 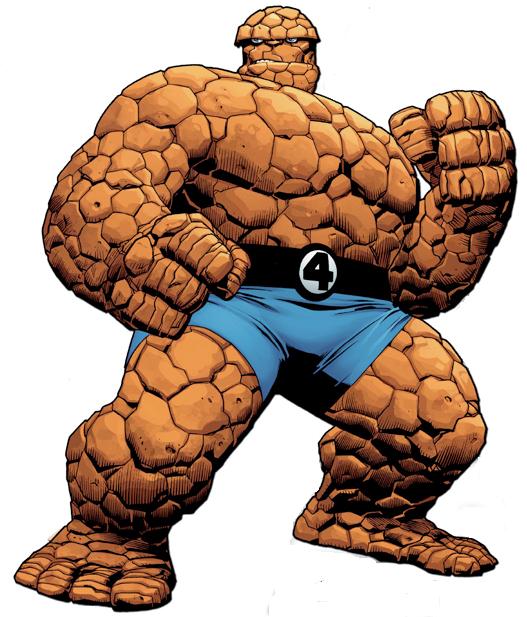 BAM. Â The jutting jawline and overhanging brow give us a perfect visual frame, they drive the audiences eyes right to the character’s face.Â  The extra thick line-work and shadows there help to resolve that area, to give us a place to connect to on a human level. Â Even if we can’t see his eyes per-se, we know we are looking into his face, which matters a whole lot more than you might realize on a subconscious level.

From the CGI design level, we have a big problem with the movie-Thing. Â See his hips? Â See his shoulders? Â See those LINES of separation that allow the legs and arms to swing freely? Â The audience can see them too. Â They may not SEE them, but unconsciously, they’re going toÂ recognize them as separations in the costume.

See, even when you are working with a wholly CGI created character, your audience is going to suspend their disbelief. Â They’re going to presume that pants have snaps and shirts have buttons (even though they don’t actually NEED them because CGI). Â So if there are separations in the form,Â those tell the audience that this is a rubber-suit. Â You’re pushing themÂ one little step closer to killing their experience. Â If it’s one of your main characters, the effect is doubled, or even more so.

Modeling and animating for VFX is a tricky business. Â Getting skin to stretch and flex in a natural fashion is not easy, not by a long shot. Â There’s a long and venerable tradition of designing your forms so that the glitches, the places where your mesh goes all wonky, or folds up badly, get hidden in shadow, under the armpits, underneath the clothes or shoulderpads or kneepads or what have you.

Now, letÂ usÂ be clear. Â The Thing likely doesn’t NEED pants. Â The between-the-legs architecture has been discussed in various venues and comic books and, well, okay, pants are not a NEED for that particular character, any more than they might be for Groot.

But the design of the movie-ThingÂ character, those breaks being in the form are the problem. Â In order to counter that “hey it’s a rubber-suit” voice in the back of your audience’s brain, that’s WHY you need pants. Â You need to either give a meta-reason for the break (a-la, hey these aren’t breaks int he suit, these are the edge of his tighty-hero pants) or you need to cover them over entirely.